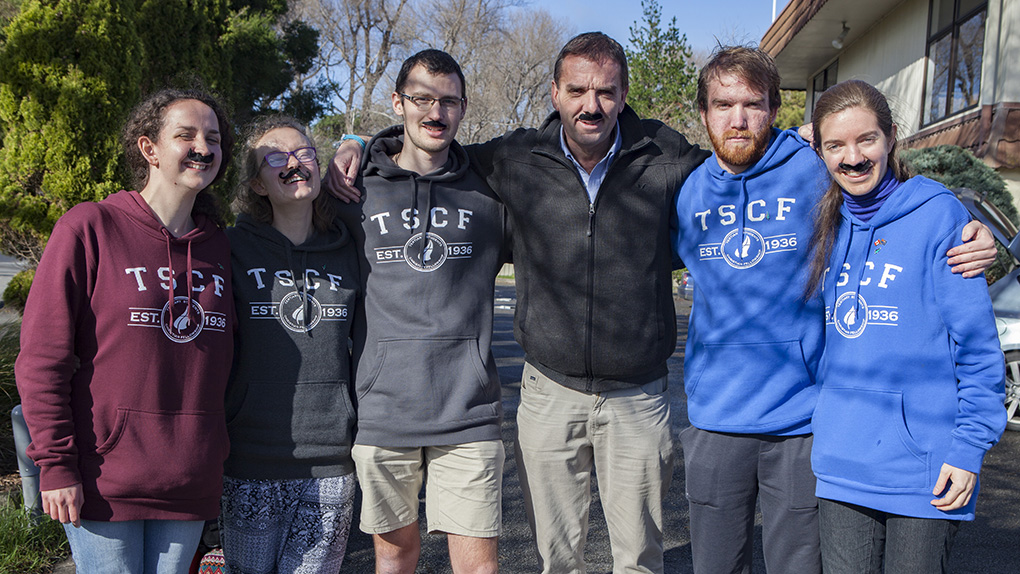 Nigel with the 2016 ministry interns.

Nigel Pollock and his family first came to New Zealand from the UK in response to a call from TSCF. He became National Director in 2006, bringing a fresh energy to the work of taking the gospel into campus life and, ultimately, into all of life for students and graduates.

His first home is Scotland. Nigel spent years developing Christian leaders in the context of UCCF in the UK, another IFES student movement, before the family adopted Aotearoa. At the end of 2018 Nigel and his wife, Ailsa, are repeating what they did 13 years ago—moving to Toronto as Nigel answers a call to head up InterVarsity Canada, the IFES work there. This time they will be starting over without their now-grown sons Luke, Jamie and Craig, who remain here.

To mark Nigel’s time here, we’ve compiled his annual TSCF reports in a booklet titled “Encourage the Good.” It tells the story of TSCF over this past season and gives an insight into Nigel’s leadership. (Contact us if you’d like a hard copy.) He wrote this farewell as a preface to the final Canvas for 2018.

Judge Andrew Becroft, who chairs TSCF’s board, wrote this in his introduction of “Encourage the Good”: “Nigel arrived in New Zealand with an established reputation as a strong and effective leader—in particular, as a powerful written and oral communicator. TSCF was in a parlous position when he arrived. There had been no full-time National Director for several years. Nigel immediately steadied the ship and provided a clear vision for the future direction of the fellowship. He did this primarily by his wonderful ability to communicate in a compelling and winsome way.

“I well remember the first message that he preached at the then Bible College of New Zealand. My own father, who also heard it, said, ‘Nigel, you could preach that sermon 100 times.’ Quick as a flash Nigel replied, ‘How do you know I haven’t, Lawrie?’”

Paul Trebilco, a TSCF Vice President and Professor of New Testament Studies at the University of Otago, wrote this in his foreword: “His crystal-clear sense of vision stands out. His passion is ‘to seek and to save the lost,’ and he speaks often of the vision of ‘seeing students coming to Christ and discipled for life.’ He longs to see the lordship of Christ over all our lives, over our nation and over our world.

“Along with this clear vision comes a strong prophetic dimension to Nigel’s ministry. He writes of ‘a prophetic mindset that sees beyond the horizon and steers a course that shapes the decisions of today and tomorrow.’ He often unmasks what is really going on around us on our campuses, in our society, and in our world. He asks the hard questions. He challenges us to grapple with what we must do differently, in the midst of challenging cultural currents, to keep communicating the unchanging Gospel.

“We also see what is close to Nigel’s heart. He loves the Scriptures. He is committed to worldwide evangelism, especially here! He has a vision for leadership development and he invests in emerging leaders. He expresses great confidence in the Gospel and, most of all, great confidence in Jesus Christ.

“In his time as National Director this vision, this prophetic dimension to his ministry, this passion for the Gospel and for the Lord Jesus, along with a great team of staff and many committed students, has led to a reinvigoration of TSCF. Nigel has led a range of fresh initiatives, spearheaded innovation and been instrumental in reaching the movement’s goals through quite different means.

“I’m thankful to God for all that he has done through Nigel, and ask God to bless Nigel and Ailsa in the days ahead in Canada.”

Nigel’s successor is Ben Carswell, who also came from the student ministry in the UK to invest in Kiwi students, and had this to say of their time working together.

“‘He’s unique, but you’ll love him.’ This was how I described Nigel to my wife, Jen, as we considered God’s calling to work alongside Nigel in NZ. After 11 years, I’d still say ‘he’s unique and we love him!’

“Nigel, Ailsa and their family have become dear friends. It has been a privilege and joy to work closely with someone who so clearly loves God and also those around him. Nigel has exemplified the importance of both ‘content’ and ‘creativity’ in proclaiming Rongopai, the good news of Jesus, helping people live joined-up lives, applying their faith to all of life and seeking to encourage the good wherever he finds it.

“Nigel has passed on the baton of leadership in TSCF having run well. We are thankful to God for him and all that has been done in his time in NZ. We cheer him on as he takes up the baton of leading InterVarsity Canada and ask for your prayers that both we and he would run with endurance the race God has set before us, fixing our eyes on Jesus.”