Investing a life in Italy 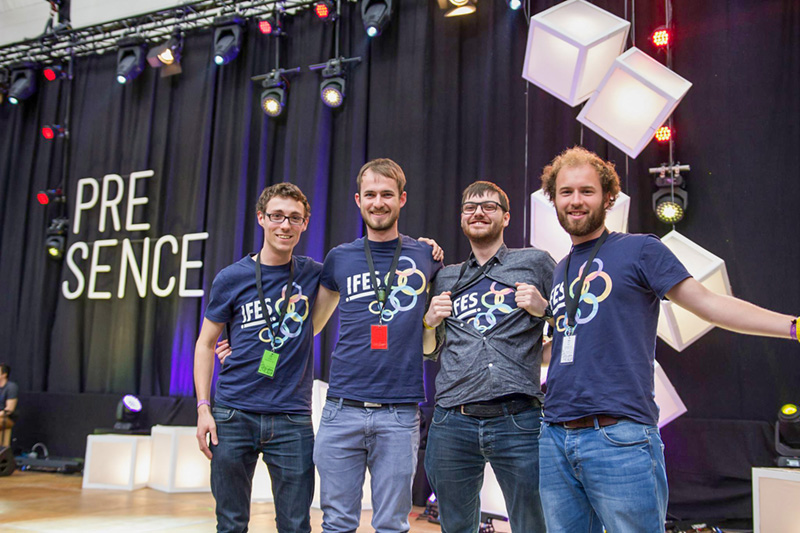 Zach, second from left, was an emcee at the IFES European Student Evangelism Conference in Germany Easter 2017.

In the summer of 2013, Zach Smith was on the verge of entering student ministry. He told his story in Canvas that year—how he’d met IFES workers at an Urbana conference, had a burden for seeing a stronger gospel witness in Europe, and was applying for a two-year stint in Italy.

This spring he returned to New Zealand for a visit, followed by his Italian fiancée. Zach’s call to Italy has been confirmed, both through the encouragements and through the challenges of cross-cultural ministry.

“The first year was really difficult—definitely the first 6 months,” Zach said. He graduated from Victoria University in 2013 with degrees in Latin and Development Studies, and in 2015 headed to Italy. While the Latin degree and some pre-emptive language studies gave him a leg up, the language barrier still frustrated him.

“I was putting too much pressure on myself with how much I should be doing,” he said. “In Italy you really need Italian, you can’t get away with not speaking it.”

He was able to disciple one student, a Catholic who wanted to read the Bible in English, but at first he spent most of his time on language courses and attended Bible studies with GBU (Gruppi Biblici Universitari).

At the end of those first, hard months, Zach’s team was part of mission weeks in Latvia and the city of Turin.

“We’d spend several hours at the university every day just talking to people, and being there every day, we’d build relationships,” he said. “I found that an incredibly encouraging experience, especially after 6 really hard months. I was really quite down about everything because I didn’t feel like I was doing much. But there I saw people quite open to the gospel.”

The following year they travelled to Malta for similar outreach. In the interim, Zach found his feet.

“I found myself fitting in really well and actually learned the language pretty quickly,” he said. During this time Ben Carswell, a TSCF staff member who had discipled Zach, visited him in Italy. “It looks like you’ve found home,” Zach recalled him saying.

During the past uni year, Zach has written and organized Bible studies and spoken to groups—usually in English, but increasingly in Italian. Because there are so many international students in Siena, his English skills are useful for Bible studies, both translating Italian into English and vice versa.

Many of these international students are from Muslim countries, and they’ve come to Europe to study.

“They’re from countries that would be so hard to get into,” Zach said. “They’re the ones coming to the talks because they’re so interested. That was eye-opening.”

He has also found contact with staff from all over Europe and central Asia valuable. Last year he attended the IFES Impact programme for the region, which addressed the ways that Bible impacts culture. Conversations with those in student ministry in Russia, Ukraine, Spain and elsewhere gave him a broader view of Christianity in that part of the world.

In his own context, most Italian students either aren’t Christians or say they believe in God but do not practice any faith.

“There’s a big mix of Catholicism and superstition and occultism,” Zach said. “You’re more likely to dabble in the occult than to read your Bible in Italy.”

Another challenge for student ministry is the intensity of study in Italy. Zach said that students have oral exams, which they often have to re-sit, and large amounts to memorise. Most students begin university study later in life than Kiwi students, and often take more time to finish.

“It seems like students are a lot busier than in NZ,” Zach said. “Even the ones who would like to help out more, they literally have no time.”
He said students also tend to be disillusioned, facing high youth unemployment as the economy is poor and little cause for hope.

Zach’s approach to outreach is to show up wherever there are opportunities to meet people and share the gospel, which keeps him busy beyond the uni year. The contexts have ranged from a youth sports camp to concerts, where he has used his talent for writing and performing music. The concerts have given him the chance to share the gospel publicly. 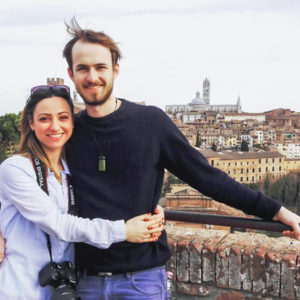 Personally, of all the gatherings that Zach has participated in, the one that turned out to be most significant was a combined churches’ camp he signed up for in 2016.

“Little did I know when I arrived, it was a couples’ camp,” Zach said. “So it was okay, there were a few single people there—mostly older people. But there was a single girl from the other church who was helping out.”

Her name is Alice (“Aleech-ay”) Trinari. Alice and Zach plan to marry in New Zealand on 9 December, attend the wedding of Zach’s best friend the following weekend, and head back to Italy in January.

When they return, Alice will be completing a law degree and then beginning work with OM in the town of Pisa. The ministry she is involved in helps women who are in prostitution.

Moving to Pisa presents a few options for Zach. It has a student population of 50,000 with only 90,000 locals. He would be restarting a GBU group that hasn’t operated in several years, while still being in training himself, and he sees possibilities to collaborate with the OM team.

GBU has an important role to play in a country where the Protestant church is small, lacks leaders and is often fragmented. It brings people together from different churches, encourages evangelism and develops new leaders.

Zach said he does find aspects of being away from New Zealand tough, but he knows he’s in the right place.

“In NZ we think we have a problem, but we have a church every block almost,” he said. “There’s so much need in Italy, it would be very hard to turn my back on that. As long as God doesn’t tell me to, I don’t think I would leave.”