Navigating the intersection between faith & politics 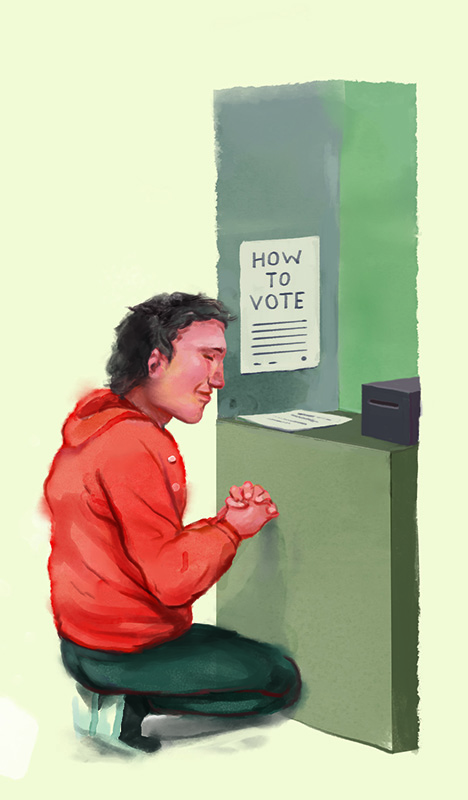 They say you’re not supposed to discuss politics or religion in polite company. I’m going to boldly attempt to do both at once, even though I feel unqualified to talk about the political side of things. Don’t get me wrong, I’m interested in politics and I think it’s vitally important – even if much of what I’ve learned about it comes from The West Wing. But it’s not my specialty. And who could ever do justice to two areas of thought that are so profound and varied?

The wonderful diversity in the Christian community means that we bring with us all kinds of passions and commitments. Sometimes, sadly, trivial matters can become our consuming desire, while we remain coolly indifferent to things that should put fire in our bellies. Other times, it is just a matter of personal preference; the things that excite one person leave the next person unmoved.

Should politics capture our attention, energy and imagination? Or is it just all a matter of preference? How should we think about our governments, and (for those living in democracies) our responsibility to elect or un-elect them? We approach this subject with different views, different passions and voting histories and backgrounds. I hope to be sensitive to those differences while outlining where as Christians – following the guidance and instruction we receive from God’s word – we can be of the same mind.

Too often, Christians segregate their faith from other parts of life, including their political views. But at the end of Matthew’s Gospel, in the Great Commission, Jesus says that all authority in heaven and on earth has been given to him – he has total authority over every single part of our lives.

In Romans 13:1-7, we read that every person is to be subject to the governing authorities. And regardless of the human processes that lead to their appointment, all earthly governments are instituted by God himself. He gives them power to administer justice and bring order to society as they work for the good of their citizens. They mediate his authority to the world, almost as though God chooses to govern societies through his appointed governments. With this authority, they have the right to make and enforce laws. For example, the government has the right to decide that there should be a bus lane outside your local shopping centre between the hours of 3 and 6pm. And even if I don’t like it, they have the right to fine me $150 for driving in it. (Not that I’m bitter.)

In a good government, laws will be made that work for the good of those being governed. As Christians, we know that the best laws will reflect God’s will and design for his world. Morality cannot be legislated, but good laws set norms and values, restrain evil, and over time set the direction and ethos of a society. Knowing that laws in line with God’s revealed will can bless a society, we pray and sometimes act to ensure that laws reflect God’s order. That is part of our role as good citizens, working for the good of our cities. We find our own prosperity in their prosperity. We should pray for them, working for their betterment – alongside the government as it also seeks these things. So earthly governments are more than just legitimate in God’s eyes; they are a good and necessary gift for the ordering of a good society.

For those of us living under democratically elected governments (for which I am very thankful), it’s helpful to remember that they are still flawed. As Winston Churchill famously said, “Democracy is the worst form of government – except for all the others that have been tried.” The gospel teaches us that we are all fallen, limited and sinful. These problems are not overcome simply because we all get together and agree on something. In fact, they could be made worse. As the saying goes, two wolves and a sheep voting on what to have for dinner is democratic. Truth is not democratically decided; truth is reality from God’s perspective. Just because something is legal, it is not necessarily right.

So what issues will we engage over, and how do we go about that? On many issues, there is no “Christian” position. For example, are trade unions good or bad? Is GST a good idea? Is the exploration of space worth pursuing? The gospel gives an enormous amount of freedom for us as Christians in all kinds of areas, including the formation of political convictions.

What about those issues where Christians should agree, as the Bible clearly directs them to a particular position? In these areas, we need to understand the difference between gospel absolutes and different opinions about tactics. Christians can differ on the latter, but we should not differ on the former. For example, we agree that we are to be good stewards of God’s creation. But is a carbon tax the wisest way to ensure that? We are to love our neighbour, but is deregulation the best way for a society to do that? We must protect the life of every person made in God’s image, but is tighter gun control a helpful step to that end?

The late American President John F. Kennedy once said, “Our problems are man-made, therefore they may be solved by man. And man can be as big as he wants. No problem of human destiny is beyond human beings.”

Is JFK right? Of course not. The Bible, not to mention our experience of watching politics in action, tells us that emphatically. Government can never fix the world. Fortunately God’s plans and purposes are not focused on earthly governments; they are focused on Jesus Christ.

This means our allegiance to earthly governments is limited. We won’t always acquiesce and agree with whatever our governments say. Sometimes we will agitate for change – in the first instance, legally and respectfully disagreeing by contacting local members, attending public meetings, using our vote judiciously or even running for office ourselves. Because God has spoken to us, even the youngest Christian can know what is best for a society in ways that the most experienced politician who doesn’t hear God can’t.

Another reason governments will never be our ultimate hope is that they can only pass laws to protect people and restrain evil. Jesus changes his people from the inside out. He doesn’t just give us an example to follow; he died to make us his people and poured out his Spirit, giving us new hearts so we can actually consider others better than ourselves.

There is one final and vital principle for our participation with governments: “First of all, then, I urge that supplications, prayers, intercessions, and thanksgivings be made for all people, for kings and all who are in high positions, that we may lead a peaceful and quiet life, godly and dignified in every way,” 1 Timothy 2:1-2. The focus here is on prayer. Knowing God’s desire for governments, we are to pray for it to come about.

So pay your taxes. Be a good citizen. Pray for your government. Vote wisely. Give to Caesar what is Caesar’s. But put your trust in Jesus alone, and give yourself and your life to God.

Geoff Robson is a Canterbury staff worker. These thoughts are condensed from a blog series on his website, Every Thought Captive.