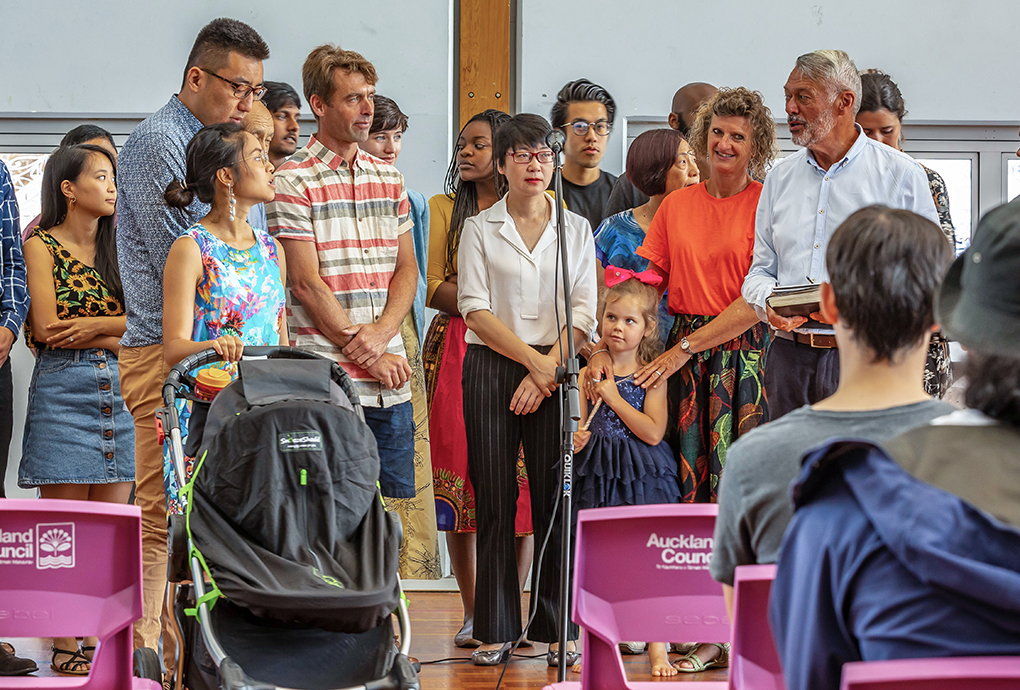 Stephen Turner’s commissioning message was brief and passionate, and then he and other church members prayed over Hanli and his wife, Sarah. That gathering on a late summer morning in a community hall in New Lynn, West Auckland, marked a new era for both men and for young West Church. Steve retired from full-time ministry in 2015; Hanli, at 25 years of age, is beginning that journey.

Hanli was born in Dalian, China, a port city in the northeast. In 2000, when he was 8, he and his parents emigrated to NZ. Christianity was foreign to Hanli’s family, but when he was in seventh form a friend invited him to Easter Camp. He enjoyed the social aspect and became a regular at his friend’s Chinese congregation. A year later, they asked if he wanted to be baptised. He said, “Sure.”

So in 2011 he publicly confessed faith, but he now says that nothing had changed in his heart—“You just kind of pick up stuff. I knew the right answers because it was really easy.”

The following September, God grabbed his full attention. Hanli said it was a culmination of things, with the foundation being gospel preaching he heard online. The clincher, however, came through some aimless procrastinating watching YouTube videos.

“I got to one with a narration of this guy’s near-death experience,” he said. “He was a pastor in America who said he came before the throne of God, and he says, ‘Lord, give me more time to live. Look at all I’ve done to serve you. Look at all the good I can still do.’ And God replied in a voice of wrath, ‘You’ve done everything for yourself and your own glory and your own kingdom, and for me secondarily, because you felt guilty.’

“I don’t know if it’s legit or not, but I remember sitting there shocked because it felt like God was speaking to me. That was the way I was living my life—everything for me, God second. And I knew that I was not really trusting him. I was sinning all the time and doing whatever I wanted. I didn’t care one bit about what he had to say. So I felt deeply convicted about my sins. That led me to cry out to him for mercy and for salvation. Really funny—through that weird YouTube video.”

Within the week, Hanli said that his whole life had changed. “I found new desires within myself. I was ashamed of all I had enjoyed. I had such a desire to soak up the Bible and find out more about this wonderful God who saved me.”

One effect of God’s claim on Hanli’s life was an interest in meeting other Christians at Massey University in Albany, on Auckland’s North Shore. In 2013 Hanli was starting the third of a four-year food technology degree. He quit the basketball club and other campus commitments and found the one Christian group on campus. TSCF’s group was made up of one girl and five other guys when Hanli joined. It was supported by Steve, who is also an associate staff worker with TSCF.

“As a young Christian, I had heaps to learn,” Hanli said. “I wanted to know more about the Bible. I also wanted to be with other Christians. … So I was really grateful that I found that group, even though it was quite small. I was there every week.”

He was also grateful for the way that Steve built into his life.

“He would meet me on campus for coffee maybe once a month,” Hanli said. “I was thankful for his patience, his discipleship. I think that made a big difference, having that weekly meeting with other students and having that person there who was able to encourage me.”

In his fourth year, Hanli began to lead the group and proactively invited others along. Soon the average attendance was 15 to 20, and they were blessed with a new, highly visible meeting space.

Hanli had friends involved in Student Life on other campuses, and he joined their conferences. There he met his wife, Sarah. She was born in Indonesia, and her family also immigrated when she was 8 years old. They married in 2015, a year before Sarah finished her nursing degree and a year into Hanli’s first professional job, with Tegel.

They left their respective churches and looked for one together. At that time, Steve had just retired from pastoring Shore Baptist after 33 years and was about to plant West Church with Shore’s support. The young couple became part of West Church, bought a house in the area, and got involved. 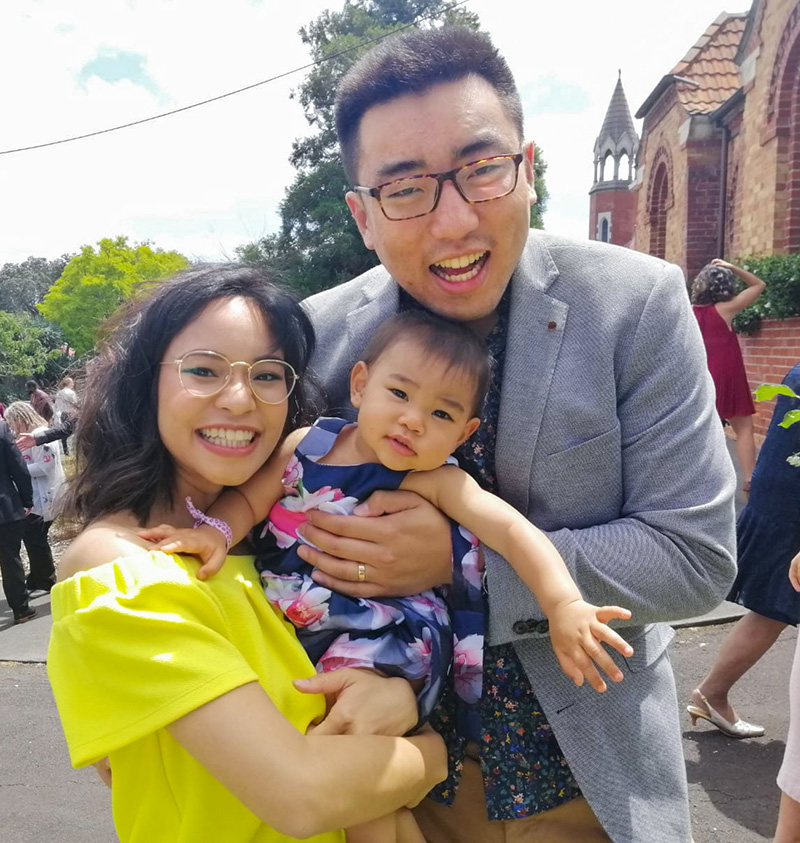 In 2017, Steve challenged Hanli to consider whether he might be called to full-time ministry.

“I said, ‘No, no way,’” Hanli recalled. “I thought about it and prayed about it for three months, and talked about it with Sarah and other friends.”

They also thought that the young professional would make a good shepherd. Hanli recognised that he’d already been given many opportunities to speak into people’s lives through preaching at youth services and Easter Camp.

“When I think back to how I preached then, I kind of cringe,” Hanli said. “But all of this seemed to be God leading me along this path.”

To verify the external call, Hanli began an internship three days a week with their church and cut his hours at work. He preached every second week, met with people, led Bible studies and spent half a day each week as associate staff with TSCF’s group at Unitec. And every week, he met with Steve.

Two years later, Hanli is convinced this is what God is calling him to. West Church became self-governing in July 2018 and, soon after, the congregation called him to be their pastor. He began officially in February. When he’s seen out his remaining projects with Tegel, his corporate chapter will be over.

Only two people initially discouraged Hanli and Sarah from pursuing ministry. Hanli’s mother, who became a Christian around the same time he did, struggled to accept that her only son was going to give up a promising career for the uncertainty of ministry. He said his father has been a bit more open, having “already made peace” with the fact that his son had decided to follow Christ. They have adjusted to the idea; “I think having a grandkid helped,” Hanli said.

Their first daughter, Amelia, is one year old, and Sarah is pregnant with their second.

Hanli continues to include the work with Unitec with his pastoral responsibilities, investing in students’ lives the way Steve invested in his.

“One really great thing about TSCF is that you’re connected with an entirely outside world,” Hanli said. “You’re on the university campus, which is the hippest place of today’s world, right? There, the ministry of the word is the same as in the church, but your view is expanded, your horizon is lifted. You’re thinking about more than just your suburb, just your community, just your little church. Your mind is open to—hey, God is doing wonderful things everywhere.

“The other thing is that there’s a real need. At Unitec, there wasn’t really a Christian group. It’s a great reason for pastors to get stuck in.”

When Hanli started showing up at Unitec, Christian students hadn’t met in more than a year so he was practically starting from scratch. After handing out flyers and talking with students, the group revived with eight core members carrying things for the semester.

“I was influenced by TSCF at Massey,” he said. “I saw the absolute wonders that God did through it, how encouraging it was for me, so I was really keen to get started.”

Hanli said that being able to share God’s work on campus with his church strengthens the faith of those there, too.

“As you hear about God working in other people’s lives, inevitably you feel encouraged,” he said. “You’re led to thank him, and you’re led to ask him, ‘Lord, will you do the same in my life and the life of my friends?’ … There’s a greater mission that we’re all part of.”