Home > Canvas > Reviews > Flying Kiwis: A History of the OE

Flying Kiwis: A History of the OE 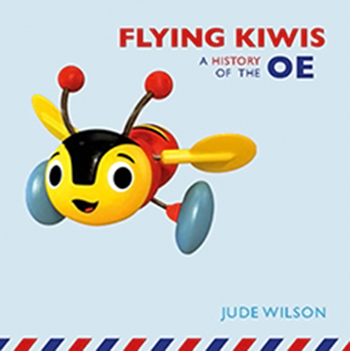 In Flying Kiwis, Jude Wilson has written a fascinating history of the OE, the overseas experience. Wilson was on her own OE for 20 years, which she recognises is far longer than the usual 2-3 years. On her return to NZ she researched the OE as a New Zealand cultural phenomenon. She traces its development throughout the 20th century and into the 21st, discovering that the OE is uniquely Kiwi.

Until recently, Wilson worked at Lincoln University as a tourism researcher. She has written a delightfully engaging book that is a thorough yet accessible reworking of her PhD research. She includes colour illustrations, photographs and cartoons as she tells stories of hundreds on their OEs since the Second World War. The book explores why they left NZ, what they did, for how long, and the drivers of returning to NZ. She explores, and debunks, the myth of a “classic” Kiwi OE: 15 people crammed into a tiny London flat, working in a pub. Wilson emphasises that there is no classic OE, despite many assuming so.

Wilson is not a Christian, so there is no attempt to discuss the gospel implications of OEs. However she is a very able guide for New Zealand’s cultural history, one that continues to shape our nation. I commend Flying Kiwis to all those interested in understanding this significant part of New Zealand’s culture.