Fear, forgiveness and the gospel 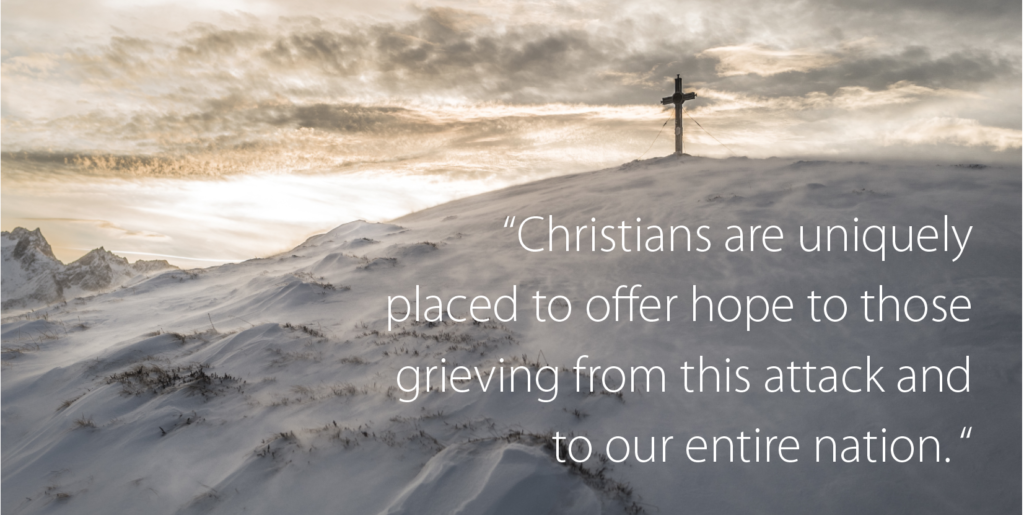 New Zealand is a country saturated in God’s common grace. Sure, we have our problems,  but we’re served by stable and accountable government that has ensured religious freedom, prosperous without being ostentatious in our wealth, filled with astounding natural beauty, a place that people from all over the world choose as their home. We’re a peaceful nation. Christchurch, my home since I moved here from Australia nine years ago, is as friendly and tranquil as any small city on earth.

But heaven on earth is an illusion, as we were reminded in a shocking and horrendous way on March 15: we experienced a flash of unrestrained evil when a heavily armed white supremacist entered two mosques and killed 51 people in a horrendous, calculated terrorist attack.

We are left shell-shocked, angry, confused, and fearful. But most of all, it’s left us grief-stricken. We are still a nation in mourning—for the dead, but also for our shattered sense of peace. In a place of such abundant blessings, it’s rare to be confronted with such unfettered evil.

We know that the distinctive Christian reaction must be gospel-centred and Christ-glorifying, which is easier said than done. To be swept along with the tide of public response wouldn’t necessarily be a disaster, because it has been everything we’d hope for: decisive and compassionate leadership from our Prime Minister; universal condemnation of acts of violence; outpourings of collective grief expressed with peace and sympathy; an affirmation that Muslims are equally deserving of a safe home here; a desire to preserve freedom of religion; perhaps even an awakening to the truth that religion hasn’t been blotted from the landscape.

But as disciples of Jesus Christ in Aotearoa, we must also respond in ways that only we can.

That should begin, of course, with fervent prayer. We’ve prayed for the victims’ family members and loved ones, for first responders, for our Prime Minister and our government, and for each other. We’ve prayed that God would ease the fears of our Muslim friends, and we’ve prayed more earnestly than usual, “Come Lord Jesus.”

Perhaps we’ve even prayed for the terrorist.

I find this last prayer almost impossibly hard. I’ve never felt the weight of Jesus’ words, “Love your enemies and pray for those who persecute you,” more than in these last few months. Christopher Hitchens felt the weight of these words, and utterly rejected them. He called it “perhaps the most immoral [injunction] of all.”

“I know who my enemies are. … I’m not going to love them,” he insisted. “You go love them if you want; don’t love them on my behalf. I’ll get on with killing them and destroying them, erasing them, and you can love them. But the idea that you ought to love them is not a moral idea at all. It’s a wicked idea and I hope it doesn’t take hold.”

He’s right, of course—if there isn’t a loving God at the heart of the universe. But if God saved a rebel like me, and if God saved a committed persecutor like the apostle Paul, who am I to decide who’s beyond the bounds of God’s mercy?

It’s time for Christians in New Zealand to ask whether we’re willing to take Jesus at his word and love our enemy. How could we love a person who’s so filled with hate, who sought to inspire hatred in others, who has committed such evil and caused so much pain? Only by remembering that while we were still sinners—while we were God’s enemies—Christ died for us. The hardness of the terrorist’s heart must be unimaginable, but we believe in a God who brings life from death and can break even the hardest of hearts.

As we reflect deeply on the gospel of God’s grace, our thoughts also turn to our Muslim friends. And make no mistake: they are our friends. They have been targeted in a truly horrific way, and Christians should be the first to stand up against any form of hatred that would target a person or a group of people because of their religious beliefs. The victims weren’t just Muslims; they were also fellow human beings, made in the image of God and precious to him. We long for freedom of religion and safety for all people. We long for friendship with Muslims.

Christians and Muslims disagree about ultimate truth. We long for opportunities to discuss those differences, proclaiming the truth about Jesus and the grace he offers. We pray that God would use these events to draw people from all walks of life—including the Muslim community—to a saving knowledge of his Son. We do this out of love; none of this means that we want to hurt each other or that we need to fear each other.

Christians are uniquely placed to offer hope to those grieving from this attack and to our entire nation. We have a hope secured by the resurrection of Jesus Christ from the dead, freely available to our friends and neighbours. In the coming months, we must remain prepared to give an answer to everyone who questions the reason for our hope (1 Peter 3:15). This begins with fixing our hearts and minds firmly on our Saviour.

As we revere Christ as Lord, we’ll be grief-stricken but not crushed, remembering our hope and experiencing God’s sustaining grace. We won’t simply ride the tide of secular love and support, as real and wonderful as that may be. We’ll meet the challenges of this moment if we revere Christ as Lord—if we remember that he alone is our salvation, that he alone is the ultimate hope for a broken and hurting country.

For as much common grace as Aotearoa has experienced, we are sorely in need of God’s saving grace. This bountiful land is spiritually arid. Secularism and spiritual apathy hold sway in these islands; we’ve received so many good gifts from the hand of our Creator, but we’ve turned our back on him.

In less than a decade, tranquil Christchurch has experienced two moments of devastation. This is no evidence that we’re facing any specific judgement. Yet these moments have shocked us to the core. How will we respond? The outpourings of common grace within the first months after this tragedy are abundant, and for that we can be enormously thankful to God. But will we also experience God’s saving grace?

Will we find not just the relief that we want, but the hope that we need? Will we, as the people of God, add to the physical outpourings of love with the most loving acts possible—prayers to a mighty God, and words of gospel hope to our lost neighbours?

Geoff Robson is a staff worker with TSCF in Canterbury and the author of “The Book of Books: A Short Guide to Reading the Bible.” He blogs at geoffrobson.com.