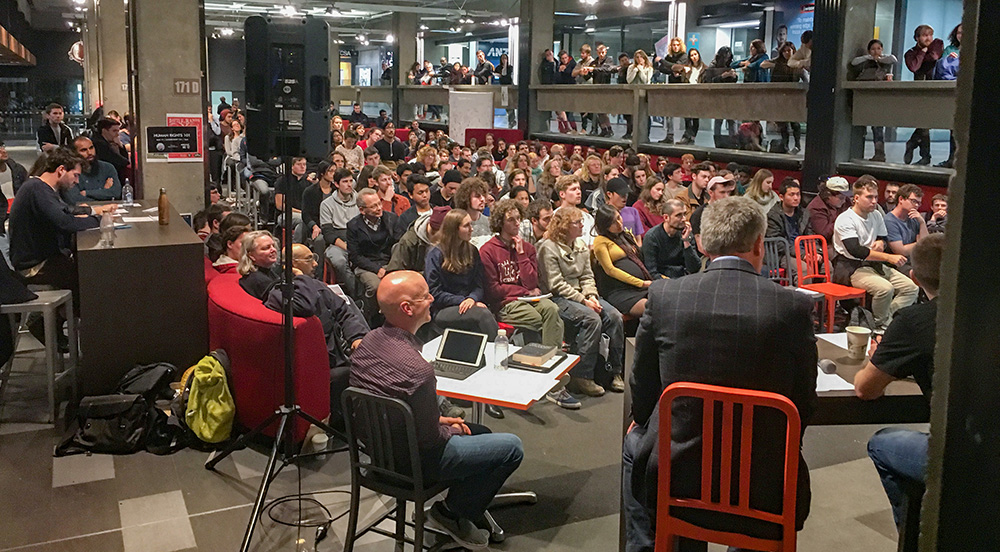 When Richard Dawkins visited Christchurch on May 11, we thought it would be a good opportunity to challenge some of the apathy regarding God that is common on campus and around the city. Geoff Robson, who also works with Canterbury CU students for TSCF, wrote an article, Why Richard Dawkins is wrong about Christianity. It was published in NZ papers prior to Dawkins’ visit and received both positive and negative responses—including a mention from Dawkins himself on Twitter. As hoped, it got people talking.

Christian Union, three other Christian groups and two Christian faculty members joined with PhilSoc, the philosophy club on campus, for an evening of public discussion on campus.

More than 200 students came along to the panel discussion and Q&A in the University Undercroft. The night started by framing the discussion with a short talk: “How to have an argument in good faith.” That was followed by three key issues raised by Dawkins: “The value of science, and the science of values,” “The role of religion in the public square,” and “The rage against God.” A speaker spent 5 minutes presenting each topic, followed by a 10-minute panel discussion. There was also time for Q&A, but more questions were asked via text than we had time to answer.

The panelists modelled well how to have a good discussion while disagreeing on certain points. The PhilSoc and the philosophy lecturer on the panel were encouraged to have some public discourse on significant issues. We hope to have more of these types of events on campus in future, encouraging students to engage with one another on areas of thought and belief. Please pray for ongoing conversations between Christians on campus with their friends, that there would be further opportunities to speak about Jesus.