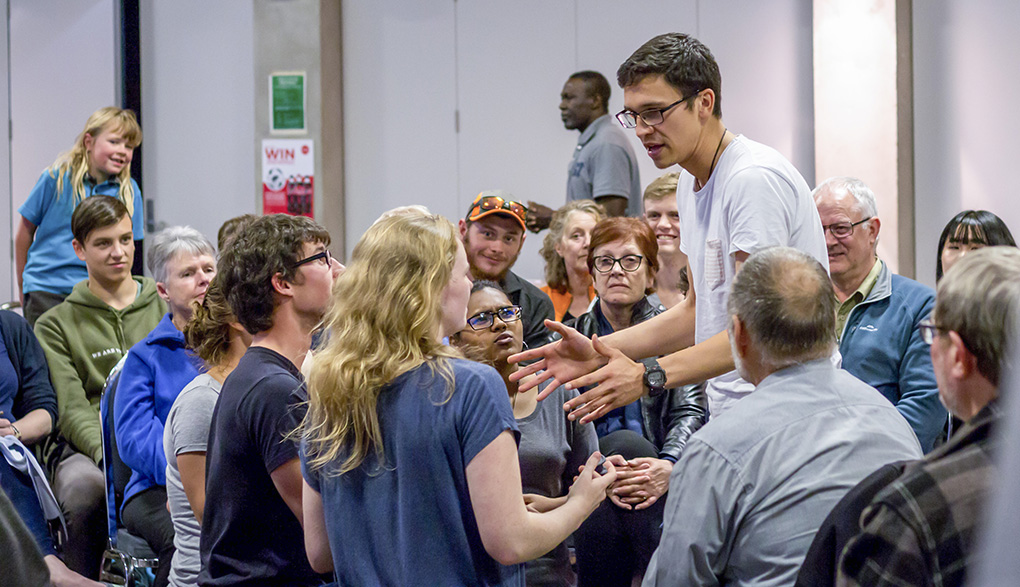 Jordan Simmonds speaks Jesus’ words while Clarissa (centre) and others look on.

The Mark Drama began in Austria with students performing the entire gospel in theatre-in-the-round. It has been used by God all over the world. Through TSCF’s partnerships with those who have produced it elsewhere, the drama has been introduced to New Zealand. Last spring the first performances took place in the South Island. Clarissa Chelliah was a cast member during her final semester at the University of Canterbury. Lincoln Team Leader Tim Hodge chatted with her about the experience.

How did you hear about the Mark Drama?

Through University of Canterbury’s Christian Union when Claire Haworth and her husband from Ireland came to give us a briefing and preview about the Mark Drama. I was instantly drawn to it from experiencing the rawness of the play. We did a quick run-through of a scene where Jesus calms the storm. The chills it gave me while watching that scene will always stick with me.

What attracted you to the Mark Drama?

Having been involved in a number of plays, I was attracted to how different this was to the conventional/traditional drama, from the way the stage is set up to the multiple roles the characters play. The motivation behind acting out the Gospel of Mark is also different, because we are acting out the Word of God. On one hand, we can feel the weight of responsibility, ensuring we don’t add our own story to what Mark has written. But on the other, there is such a freedom we feel when we can trust the Holy Spirit to help us.

How was the process of rehearsals?

Unlike most plays where one has to memorise lines of script, being part of the “Plus Team” (half the cast has named roles and half—the Plus Team—have multiple roles) meant that I needed to just memorise the sequence of events. A guide is provided to help us memorise the book in six weeks. I found this very helpful, not only for the sake of memorising the drama, but for my own growth as a Christian. Meditating on the work of Jesus throughout those weeks was incredible.

As a few of my friends were also part of the play, it was helpful to go over the sequence of events together every time we caught up. It is certainly an encouraging time when we are challenging each other to memorise the gospel together.

We only practiced for a total of 15 hours before performing it for three nights. Insane? Not when you have the Holy Spirit helping. It certainly helped maintain that “raw and real” experience for us and the audience.

Was the Mark Drama experience for you as expected?

Certainly not. It was so much more than I expected. Being part of plays, we benefit from improving our talent and building relationships with fellow actors. This experience was more than that, because it was not for personal gain. Yes, our knowledge on the book of Mark improved, but more than that, it was all for God’s glory. Unlike most plays where the lines do not benefit you once the play is over, what we have memorised for the Mark drama will always stick with us.

Your fiancé Jordan acted as Jesus; how was it for you as he learned Mark’s Gospel?

It was certainly very encouraging to see my future husband spend hours memorising God’s Word. Playing the role of Jesus is no easy task, but seeing him depend more on God challenged me to do the same. It was a very real experience of my future husband striving to be like Christ. Helping each other in our pursuit to memorise the flow of Mark’s gospel has also been wonderful. Now that the Mark drama is over, we still try to go over the sequences and lines so we do not forget them. Nothing beats a date night then a quick run through of the book of Mark. 😉

What was your role?

I played different characters. This included being a member of the crowd, a disciple, and Pilate. It was not easy playing Pilate and sending Jesus to be crucified! Through playing these different characters, I was able to be in the shoes of people who encountered Christ. This gave me a deeper appreciation of Jesus and the compassion he showed people. Now when I read the gospel, I certainly have a different, more realistic picture in mind.

What’s your hope as a future Mark Drama director?

If God wills, I hope to direct the Mark Drama wherever he has placed me in the future, be it in NZ or in Malaysia. My desire is that everyone involved, cast or audience, will encounter Christ in a personal way.

What were some of the comments and reactions from those you invited?

Most people were impressed at how we were able to perform after only three days of practice. Many told us that they had never realised the reactions of the disciples and people in the Bible were so relatable. Seeing Jesus beaten and crucified were certainly moments that impacted many. There is nothing quite like visibly seeing someone suffer because he loves you and wants to save you from your sins.

What do you think is in store for the TSCF groups doing the Mark Drama on campus?

It will be an awesome opportunity to unite the Christian students on campus, as well as to grow in faith as they dedicate time to read and memorise the Word. It might not be easy balancing this with studies and other commitments, but it is certainly worth it.

In terms of reaching non-believing friends, inviting people to a drama like this will open up doors for conversations. As Timothy Hodge often says, if they might not be keen to read the Bible with you, they might be willing to watch it! And we can trust that the Holy Spirit will convict them through that.