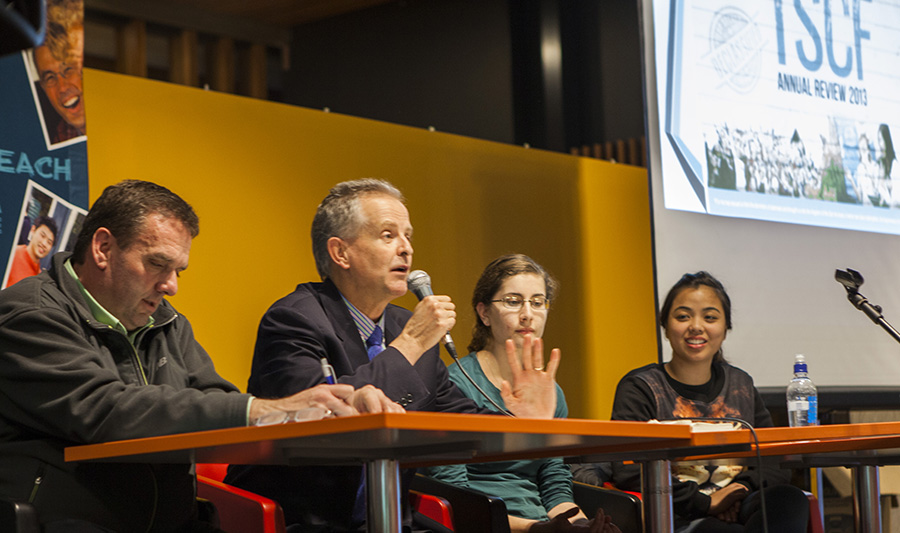 Andrew Becroft chairs a TSCF board meeting in 2013.

Judge Andrew Becroft has been the Children’s Commissioner since July 2016, following his work as New Zealand’s Principal Youth Court Judge. He is Chairman of TSCF’s board and has also been, among other things, a student leader in Auckland’s Evangelical Union …

I arrived at Victoria University in 1976, and quickly joined up with the CU group – which wasn’t, in retrospect, the most wonderful experience of my university life. For various reasons, I struggled to fit in.

But after the first year, the whole family moved to Auckland. I moved with them – it was like moving from Mars to Venus, and it was terrific. I was welcomed into that group the day I arrived. I got rung by a student who became a lifelong friend, and I became his best man at his wedding. I loved everything about Auckland University and the Christian group at Auckland University.

The first is leadership development. Staff in those times, just like the staff of this generation, were enormously capable and talented. Many of the staff then, as now, could have led other national student Christian organisations. But the staff were committed to developing student leadership. They sat back and encouraged and enabled students to lead meetings, to chair meetings, to speak in public at TSCF conferences to students. The ethos was staff taking a back seat.

How galling it must have been, in a sense, for such capable and talented staff to have to sit back and see a gawky, 6-foot-2 giraffe with a speech impediment stutter his way through much of what was said in public. But it gave me confidence. I was helped enormously by the staff. The staff were alongside me. The staff nurtured me. And the staff gave me opportunities that I otherwise would never have had. I doubt I would be in the role I am today were it not for the faithful encouragement and enabling of the TSCF staff, who helped train me in terms of leadership.

The second thing that stood out was the evangelism – the commitment to sharing our faith.

We recently had a bring-a-friend service at Karori Baptist Church that was modeled on exactly the same principles and organisational model that we used 40 years ago at Auckland University for an evangelistic bring-a-friend dinner with Michael Griffiths. There’s nothing much that is new in evangelism, there’s no one model, but what we did all those years ago still works today as a means of introducing friends to Christ. We used to hire a bus at Auckland University on Saturday nights to go to the hot pools at Waiwera. Numbers grew because of it. People were at loose ends on Saturday night and wanted an activity. Those sorts of things still work today. While I hear that student life has changed, student pressures have become more pronounced – all of which I’m sure are true – students still have a need to do things together. Well organised activities that are interesting still work.

And the fourth thing that stands out to me is that I made friends for life. I’ve made lots of mates since, and acquaintances who’ve come in and out of my life and whom I’m friendly with. But my real friends, my life-long friends, the sort of friends of whom it’s said “iron sharpens iron,” are all the friends that I made at TSCF. Indeed I met my wife at TSCF.

So, for me there are four principles that absolutely influenced and transformed my life, that I hope will still be key for TSCF: Developing student leadership and being true to a model of student, not staff, leadership. Secondly, a commitment to creative evangelism, where friends are introduced to Christ. Thirdly, the centrality and power of excellent Bible teaching. And fourthly, the forum for which friends for life can be made.