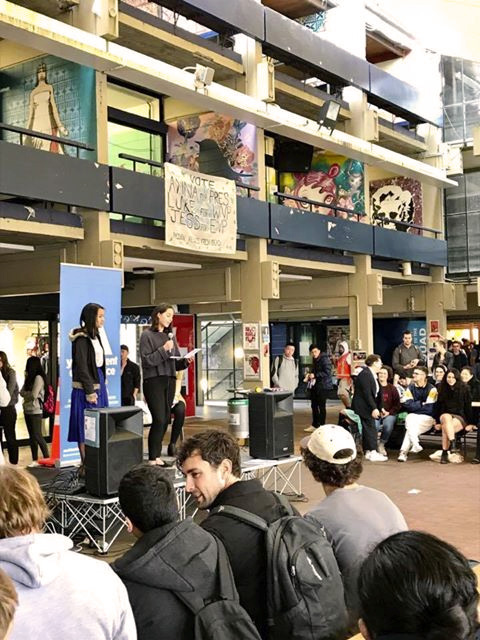 Joy Britten, a leader of TSCF Auckland’s Seeking Truth on Campus, speaks at the AUSA’s public forum in August to defend ProLife Auckland’s place on campus.

The student association at the University of Auckland made headlines in August when it allowed a referendum that proposed disaffiliating ProLife Auckland and banning future affiliation by clubs with “similar ideologies.”

Pro-life groups have faced opposition from AUSA members before. Owen Posthuma, a member of both ProLife Auckland and Veritas, TSCF’s group for law students at the University of Auckland, said that ProLife Auckland first attempted to affiliate in 2010. Initially it was blocked by a policy created in 2005 to keep another pro-life group off campus, but then the AUSA acknowledged that the policy could run foul the New Zealand Bill of Rights Act 1990.

So ProLife Auckland affiliated, which allowed it to be recognised by Campus Life, the student services division of the University of Auckland, and to receive the same support as other clubs. Clubs retain their official recognition even if they leave the AUSA or are disaffiliated, however they must first affiliate with AUSA to gain recognition. In both 2012 and 2016 the group faced attempts to disaffiliate it—a symbolic gesture that failed each time.

This year, an anonymous AUSA member proposed another referendum to not just disaffiliate the group, but also to keep ideologically similar groups from affiliating. Members of the AUSA voted online 21–25 August, approving the referendum 1599 to 1021. Those who voted represented fewer than 4% of the student population; not everyone is an AUSA member, and not all AUSA members voted.

In October the AUSA nullified the vote after being advised that the two halves of the question made it biased or leading. The original result would not have materially changed ProLife Auckland’s status on campus. However, if it had been ratified by the executive, then clubs deemed to have “similar ideologies” could have been blocked from gaining official recognition from the University of Auckland. The main impact of this would be limited or more expensive access to space on campus.

“For some groups, this would not be a big deal,” Owen said. However, “for a group that seeks social and political change, symbolic rejection undermines the very reason for existing in the first place.”

In a public forum in August, students who spoke against ProLife Auckland equated its ideological foundation to religious beliefs. This referendum’s inclusion of clubs with “similar ideologies” attracted the attention of existing Christian clubs, which joined the pro-life club in opposing it. TSCF has seven student groups based at the University of Auckland aside from Veritas: the Evangelical Union, Christian Medical Fellowship, Overseas Christian Fellowship, Christian Nursing Students, Seeking Truth on Campus, and Korean Young Adults Christian Fellowship.

“One of the key reasons that ProLife Auckland has tenaciously opposed the disaffiliation is that this could affect other clubs,” Owen said. “We need to support dialogue.”

Owen said that the Campus Feminist Collective, which was behind the 2016 campaign to disaffiliate ProLife Auckland, resubmitted each of the two sections of August’s referendum separately for the vote in late October. A week before voting commenced, the AUSA dropped a resubmission of the second section, “Should AUSA prevent the future club affiliation of any group with a prolife ideology?” It said that the question is contrary to the AUSA constitution.

If AUSA members approve the motion and the executive consider adopting it, Owen said that the pro-life group will challenge the decision.

Whether or not ProLife Auckland is disaffiliated, an element of the University of Auckland’s student body appears committed to marginalizing clubs on ideological grounds. The student association’s response will reveal the depth of its commitment to tolerance and inclusivity.

Postscript: the results of the AUSA vote are available online. As of 10 November 2017, it isn’t clear whether the AUSA will pursue the club’s disaffiliation.