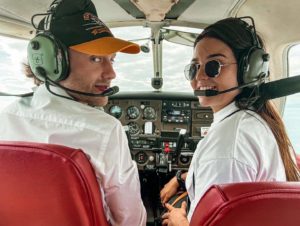 Finlay is a recent graduate of Massey University, who made a commitment to follow Christ in his final year as a student. He shares some of his journey with us.

Tell us a bit about yourself. I grew up in Christchurch, where I attended both primary and high school. At the end of last year I completed my three-year pilot’s degree in Palmerston North. After that I moved back home during these uncertain times to keep rent low, work hard and continue my flying. I hope to shortly join the Air Force as a pilot, or continue in general aviation to be a flight instructor, with a penultimate career path as an airline pilot.

How did you first hear about Jesus? I attended a Christian primary school as a child, and was baptised, as well as receiving communion. I grew up with traditional Christian festivities, where going to church with grandma at Easter was an exciting event to look forward to.

What made you decide to commit your life to following Jesus? It wasn’t until my third year of university that I answered the questions I had been bottling up for many years. I had a friend from my time in the university halls who was a Christian and part of the Massey Uni Christian Fellowship. I asked her lots of these questions and she also invited me to attend her church. When I moved home to Christchurch, I also had some experiences which confirmed to me the reality of God. All of this led me to commit my life to Jesus. As I keep learning more, I can’t help but think about the privilege I have to even be here on this planet. I have reclaimed my Christian faith permanently, and want to continue to learn the teachings of the Bible, and make better decisions with the life God has laid before me.

How has the witness of other students influenced you? It was my friend from CF who initially invited me to church. But since then, I found that I was drawn by the teaching of Jesus himself, and became eager to learn more. When I moved home to Christchurch, I began attending a church near the University of Canterbury, and I have rekindled dozens of old friendships with my high school mates who I found also attend there. I’ve also been influenced by many other positive people around me.

How has your life changed since you made the decision to follow Jesus? My life has become more certain out of previous uncertainty. I have direction once more, I have faith, willpower and Christian family. I have become more aware of myself and others, as well as having made many notes in church to see the deeper truths from life and Jesus’ teachings. I can wholeheartedly say that I have grown into a new person since my last year at university, and I am looking forward to living out the life God has for me.