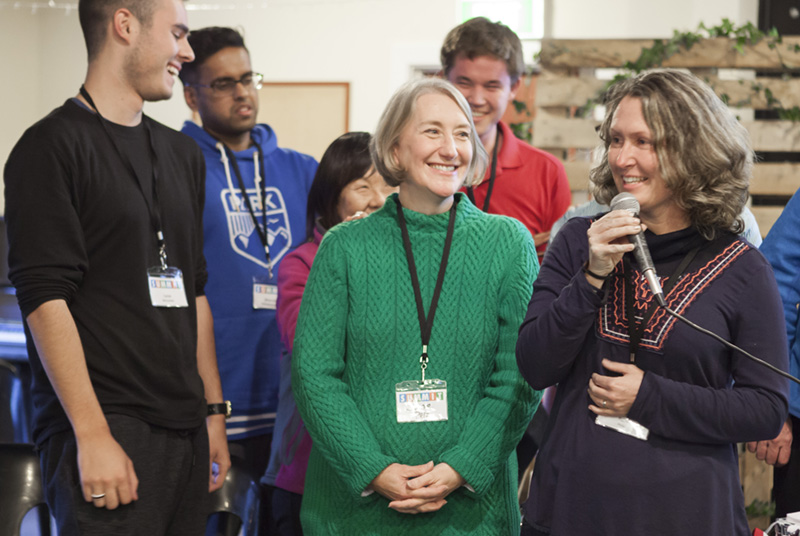 After 3 years, it’s been excellent to reconnect with TSCF staff, students and university groups, particularly during Summit. I heard and shared stories of mission on campus; what God has been and is doing is always a motivation to keep serving through CECE in Ecuador! We explored lessons through the life of Joseph and one student’s summary expressed participation in God’s mission at university well: LIFE = learning, international, family, encouragement.

The most entertaining part of Summit was TSCF National Director Nigel Pollock auctioning off Ecuadorian crafts and food products to raise funds for CECE. We’re thankful for the generosity of students and staff who bid.

Three new university groups have been born in the city of Loja in southern Ecuador. This is in partnership with SIM missionaries with a base there and a local pastor who was a CECE staff worker. One group is based in the music school and the others are in the national university and the main distance learning university. We have no staff in Loja. Pray that committed student leaders will grow as CECE and SIM provide the support and resources to be a faithful witness on campus.

We are thankful for financial partnership with IFES movements like TSCF, and that CECE is building a stronger local base. To help students get to the national camp back in 2015, a student from Quito suggested that we do a Fondoton. A participant gathers sponsors who pay them for running as many kilometres as possible in an hour.

In 2016, 11 people raised around US$800. The next year the same student suggested we try a national fundraiser, and roughly 25 people in three cities raised about US$3000. In 2017, around 80 people in six cities—students, parents and graduates—raised US$8000. This creative fundraising has significantly reduced the cost of the national camp and the leaders’ training weekend, provided scholarships for students, and funded evangelistic initiatives. It has also meant that hundreds of new people are giving to CECE through the Fondoton.

Life out of the rubble

Just eight weeks after the major earthquake in April 2016, a new university group began in the city of Portoviejo, which had been at the epicentre. Kevin, a med student, began inviting his classmates to study the Bible with him and so the initiative began. We are encouraged by his faithfulness and would love to have staff to send to work in this city.

• For a new admin assistant for the CECE office.
• For consolidation of the staff team, and staff for cities with none.
• For committed and sacrificial outreach for student groups as new semester begins in October.

Ruth Hicks is a staff worker with CECE Ecuador, and part of the TSCF team.