Canvas | Issue 91: Engaging with Culture Through a Gospel Lens

Rabena (Bena) Tanielu and her niece Kuini Seuseu serve as associate staff workers for TSCF in Auckland. They share some personal reflections on how the gospel has shaped their own views and experiences of culture.

Tell us a bit about yourself and how you came to be involved with TSCF.
Bena: I heard about TSCF when I was a student down in Otago. I wasn’t considered an international student, but I didn’t look like a domestic student, so I didn’t really find a space there. Then, in 2017, I was catching up with Kuini and my other niece on campus. I asked them how they were growing in the Lord whilst being university students. I cared that they were reading their Bible and furthering their faith. To their credit, they asked if I would consider doing a Bible study with them, so I committed to that, and they brought a couple of friends along.

Meanwhile, Andrew Becroft approached my husband Ronji about being on the TSCF board. Then, around the end of 2018, Ben Carswell asked if I would consider joining the staff, and I became an associate staff member. We’re probably a little bit different – our Bible study Sola Scriptura hasn’t been student-led because of the different demands and commitments of the students who are more than likely to be part of our group.

Kuini: I was a student a couple of years ago but I was never involved in any TSCF student groups. It was actually not until Aunty Bena approached me about joining the staff that I really understood or knew about TSCF. I heard about the shortage of staff in Auckland, prayed about it, and I guess – here we are! Sola Scriptura first started outside of TSCF, and now we’re under the umbrella of the ministry.

What is your ethnic background?
B: I am Samoan. I was born in NZ, but I was raised between NZ and Samoa. I still call Samoa home, as they were my formative years and I was being raised by my grandfather, so there are those familial ties as well, for me, to my village and those things. I’m very proud of my NZ nationality because I think I was blessed with both worlds. But also, I’m just a sinner saved by grace – that’s exactly what you are as a Christian before you’re anything else.

K: I’m Samoan and Tokelauan. My mum and I were born and raised in NZ. I always label myself a NZ-born Pacific Islander. In terms of my specific ethnicity, I’d say I’m Samoan-Tokelauan. I call NZ home. It’s interesting how your culture changes depending on where you are: If I went to Samoa I would say, “I’m a New Zealander,” but here I would say, “I’m a Samoan-Tokelauan.” I think in terms of growing up and understanding my culture, for me it’s been very fluid. It changes depending on the context and place you’re in, that’s my personal experience.

What does culture mean to you? And which cultures do you identify with?
B: Culture is made up not just of ethnicity. When I think about culture, I think of my ethnic background because that’s shaped my culture, my subcultures, my social constructs. I think my birthplace has also shaped my culture: being born in NZ but being raised back in Samoa. And then I also have this Pasifika educated culture (university or tertiary-educated) so that puts me in another kind of subgroup or subculture. And then the fact that I lived 18 years in Otago, I would consider that part of my culture. I also lived in West Auckland, and then my husband’s culture comes into mine – we’re part of South Auckland, the Māngere subculture as well. Your culture moves when you move. And then you’re part of the body of Christ, and the body of Christ globally.

How has the gospel and following Jesus shaped your view of culture?
B: I think that’s why the gospel is so important for all cultures because it really levels the playing field for everyone. I think the important part is the gospel lens, everything – culture, finances, family, nationhood – you view through the gospel. Paul says in Philippians 3:4, “If anyone else has a mind to put confidence in the flesh, I far more.” I love what Paul’s saying, because he’s listing out this CV – culturally, educationally, in terms of his pedigree. And he turns around and says, “Whatever things were gain to me, those things I have counted as loss. I count them but rubbish.” I know that I have no confidence in my flesh – being Samoan, university-educated, living in NZ – my confidence isn’t in that. My only confidence is in the person and work of Christ, his death, burial and resurrection for me, a sinner.

K: For me, it’s realising our culture shouldn’t be elevated in the way that we elevate it. From what I hear of growing up in the Pacific church, the culture is often elevated over the gospel. The church for the Pacific is predominantly a safe haven or a place of identity – if you’re Pacific you’re assumed to believe in God, or to know God, or to claim yourself as a Christian, but as I understand the gospel, I understand that those things aren’t true. I think it’s firstly looking at culture through the lens of the gospel. How can we use our culture to elevate the gospel?

What are some examples of how you’ve seen the gospel influence culture?
B: We see Paul do that really wonderfully in Acts. He goes to the synagogue first, because he is the “Pharisee of Pharisees” and the “Hebrew of Hebrews,” so whilst he labels that all as a loss, he still uses it. He debates with the Jews; he brings in Moses, the forefathers, and then he brings Christ. And then he goes to Athens and he says, “One of your altars says ‘To an Unknown God.’ Let me tell you about the God that you’ve made this altar to.” He brings the gospel to both the Jew and the Gentile, but in two very different ways. Paul debates with the Pharisees, and yet he gives a philosophical talk to the Greeks because that’s how they are wired.

K: At my church, we’re trying to get into the whole practice of not using church as a way we come to practice culture, but how we can use, for example, our traditional dances and songs as a way to glorify God and showcase our culture in a way that the gospel is presented. We’re trying to be intentional. Not to devalue the distinct culture and ethnic identities God’s given us, but asking: How can we use culture for the glory of God and for the advancement of his gospel? 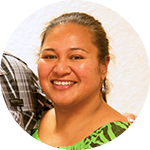 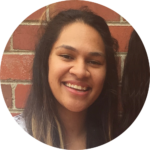 We’re so grateful to have Bena and Kuini on the team, and we’re excited to welcome Kuini as our newest staff member. Please pray for them both as they seek to grow the work with Pasifika students in Auckland and around the country.