The Lincoln team is welcoming a familiar face as associate staff. Blake Marshall was involved with the CF during his time at Lincoln University, where he graduated in 2006 with a degree in agricultural science. He was a new Christian then, and said that he grew through that time of intentional discipleship.

Blake married Cheryl about four years ago, and they have a daughter named Milena. Following a stint as a property valuer, he’s a dairy farmer now, working eight days on and two off. Blake is volunteering four hours a week to one-on-one discipleship with guys who are part of CF.

“I like that it’s student-led, encouraging them to take the initiative,” Blake said. “I’m looking forward to trying to help students transition to the workforce and still be committed to following Christ Jesus.”

David has joined the team to lead the Waikato and Bay of Plenty regions. He studied at Victoria University in the 1990s, where he was part of the TSCF group and then served as a graduate intern (now called Minty) in 1998 and 1999.

“I came to faith in Jesus during my first year and the TSCF group helped me grapple with what it means to be a disciple of Jesus,” David said. “It was a community of students eager to grow and to reach the campus with the gospel of Jesus Christ. My main memories are being challenged to embrace whole-life discipleship and apply my faith to my studies, and attending several mid-year TSCF conferences – they were fantastic.”

David subsequently became a high school teacher, working at Tawa College until 2005, when he moved to the UK. There he worked as a project manager, travelled and met his future-wife, Wendy, who is from Tauranga.

David and Wendy married in 2011 and returned to New Zealand in late 2013. They have a daughter, Hannah, and a son, William.  David worked for three years at Bay of Plenty Polytechnic (now called Toi Ohomai Institute of Technology) before joining TSCF this year.

“Since my time as an intern with TSCF I have had a strong desire to serve in intentional Christian ministry and that sense has been an ongoing, open prayer with God over all these years,” David said. “With Li Lian Lim moving on last year the door has opened up to follow-on from her work in the Waikato.”

David works three days a week with the aim of growing this work further. A University of Waikato CBD campus is planned for Tauranga by 2020.

“My vision is to be part of an organisation that takes discipleship and mission seriously and seeks to impact New Zealand society – and the wider world – with the radical and good news of salvation and hope in Jesus Christ,” David said. “I hope to develop a team of staff and student groups that authentically witness to, challenge and invite today’s students to follow Jesus Christ in all areas of their lives.” 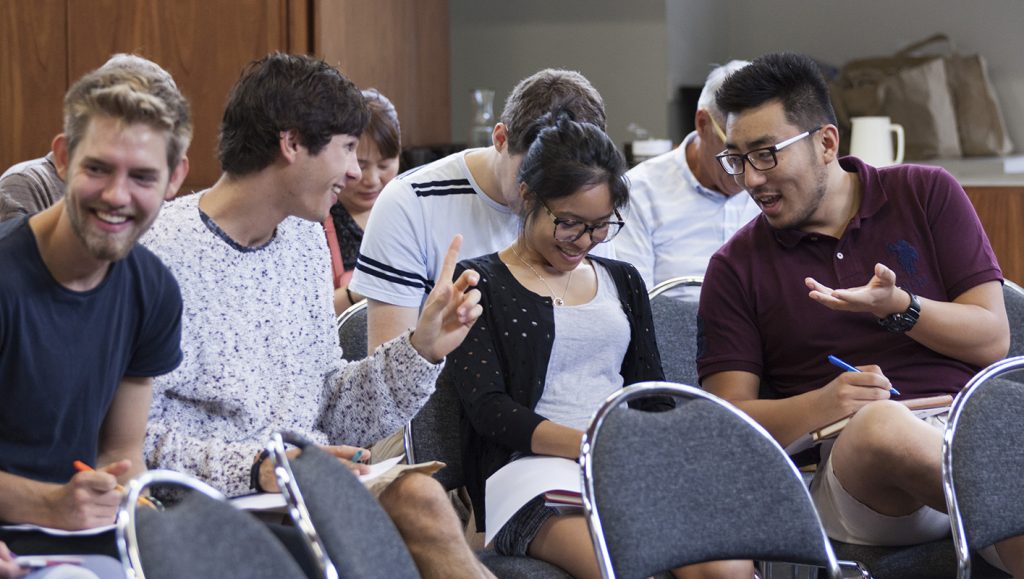 Hanli, right, and his wife Sarah at Launch Auckland in February 2017.

Several of the Auckland groups are supported by volunteers – “associate staff.” This year the group at Unitec’s Mt Albert campus welcomes Hanli Liu, who became a Christian himself as a uni student.

“I arrived in NZ from China with my parents when I was only 8 years old, so I grew up as a Kiwi in most respects,” Hanli said. However his family had never attended church, as Christianity was rarely heard of in China.

He first came into contact with TSCF group on the Massey Albany campus, where he studied Food Technology. Since then he worked at Tegel Foods Ltd.

“I thoroughly enjoyed my work but felt called to serve God in ministry,” he said. This year he is also interning at the Shore Baptist church plant in New Lynn, alongside fellow associate staff worker Stephen Turner.