Margaret Piper died on 11 March 2018. Her faithful support and prayer are missed by many, including TSCF. Margaret Frethey and Ross Piper first met at the 1960 IVF Conference in Masterton and became strong supporters of TSCF. Margaret and Ross coordinated the mailout of Canvas for many years. Margaret also helped to coordinate prayer groups and mission interest in the Wellington area for both Interserve and OMF. 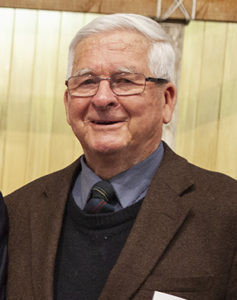 Professor Wilf Malcolm PhD, CBE, died on 6 October 2018. He was the second full-time General Secretary (National Director) of TSCF from 1964–1967. He had a huge influence on many faculty and students.

At Feilding Agricultural College he was a keen sportsman and went on to Wellington Teachers’ College where his interest in mathematics grew. He gained an MA, after which he worked as Travelling Secretary with Scripture Union for a year.

While studying at VUW he was president of the Evangelical Union for two years. During this time a mission was held on campus with Rev Dr Howard Guinness, in which many came to faith. Howard’s earlier visit to NZ in the 1930s had been highly influential and led to the formation of Scripture Union and IVF/TSCF here. While a medical student in the UK, Howard was asked by fellow students from IVF to go in faith to other Commonwealth countries and lead missions there. This also led to the formation of sister fellowships in Canada and Australia.

Guinness wrote that there were 100 EU members at Vic when the mission began and 200 at the end—in a university of about 1000 students! EU was the largest club on campus.

Wilf went to Cambridge on scholarship. He and Ruth, who had also been on the VUWEU exec, were married there.

They returned to New Zealand and he took up a lectureship in Mathematics at Victoria University. In 1963 he became General Secretary of IVF (later TSCF). In his final year, 1967, he also lectured full time. Back at Vic, one of his own students was lecturing in his area of pure mathematics and he had to carve out a new area of teaching and research.

In 1975 he became Professor of Pure Mathematics and in time became Academic Pro Vice-Chancellor. In 1985 Wilf and Ruth moved to Waikato University where he was Vice-Chancellor until he retired in 1994.

Wilf had a lifelong commitment to consistent, thoughtful Christian living and leadership. He gave himself generously to people even when he was extremely busy. He was a brilliant chair of any committee and continued to lead significant government committees after he retired. He also lectured in the University of Brunei, Darussalam. In 2003 the Wilf Malcolm Institute of Educational Research at Waikato University was established.

Wilf’s older brother and sister also made important academic contributions and were very involved in TSCF. Margaret became the first woman to be appointed Principal of a NZ Teachers’ College and Geoff as Professor of Chemistry and Dean of the Faculty of Science at Massey University. They were both Vice Presidents of TSCF. Hilary Hague, the recently appointed National Director of Scripture Union, is the oldest daughter of Wilf and Ruth. He is also survived by Ruth and children Alison, Judith, Kirsten, Gordon and Tane, and their families.