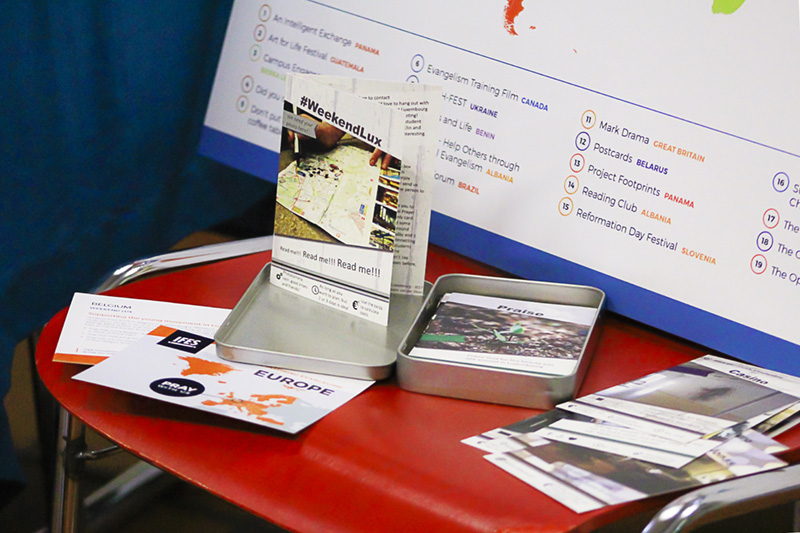 When Gunn from IFES Norway pioneered a movement in Luxembourg, we of Ichtus Vlaanderen in Belgium were enthusiastic. Since she was all alone there and it’s not far from Belgium, we included her in our staff retreat and got to know each other better.

A new movement needs prayer. So I took the train to Luxembourg and sat with Gunn and a German student named Sarah. We developed a tool called WeekendLux to encourage Belgian students to:

2. Pray for Luxembourg—for the country, the new movement, for Gunn, for the students and for Christians.

One student designed a box filled with cards for us. There are around 40 cards divided into four categories: practical, cultural, engaging with the gospel, and food and drink. Each has a picture, practical information, and a category called “going deeper.”

We want to help students think holistically and see, for instance, that eating is not necessarily less spiritual than evangelising. The Portuguese restaurant Popkorn is in the category “food and drink.” Its card tells us: “About one fifth of the population in Luxembourg is of Portuguese descent and an even larger proportion of the Christians. This has its roots in a revival among the Portuguese immigrants in the 1960s that led to the start of the Portuguese-speaking Assembly of God church.”

As they go to a museum, they can reflect on how the first people in the Bible described as “spirit filled” were artists. We propose they hitchhike to Luxembourg and, as they get picked up, tell the driver that they are going to pray for Luxembourg.

Wouldn’t it be great if students took up the challenge to make something similar in their own countries and this was used by travelling students all around Europe? (Sorry, New Zealand. It’s a bit easier in Europe where you can close your eyes for a second and accidentally arrive in another country!) We hope they will learn to look at travel and prayer holistically.

We hope this will open possibilities for them, that they might start applying this in their daily lives and travels. We hope they will learn to look at countries with spiritual eyes.

We hope they will learn to love Luxembourg and will be moved by the story of the little, new IFES movement. We hope they will pray for them more often and even consider going there long term.

And of course, we believe prayer really works!

Lara Creemers is a staff worker with Ichtus Vlaanderen, the IFES work in Belgium.