Home > Canvas > News > Changed for life: A celebration of service

Changed for life: A celebration of service

At the TSCF AGM in September, we expressed our deep gratitude to two people for their key roles of service to TSCF: Rubee Yee for over 40 years on the TSCF Board, and Judge Andrew Becroft for his 15 years as TSCF Board Chair. We want to thank them again for generously giving themselves to serve the Lord in student ministry. 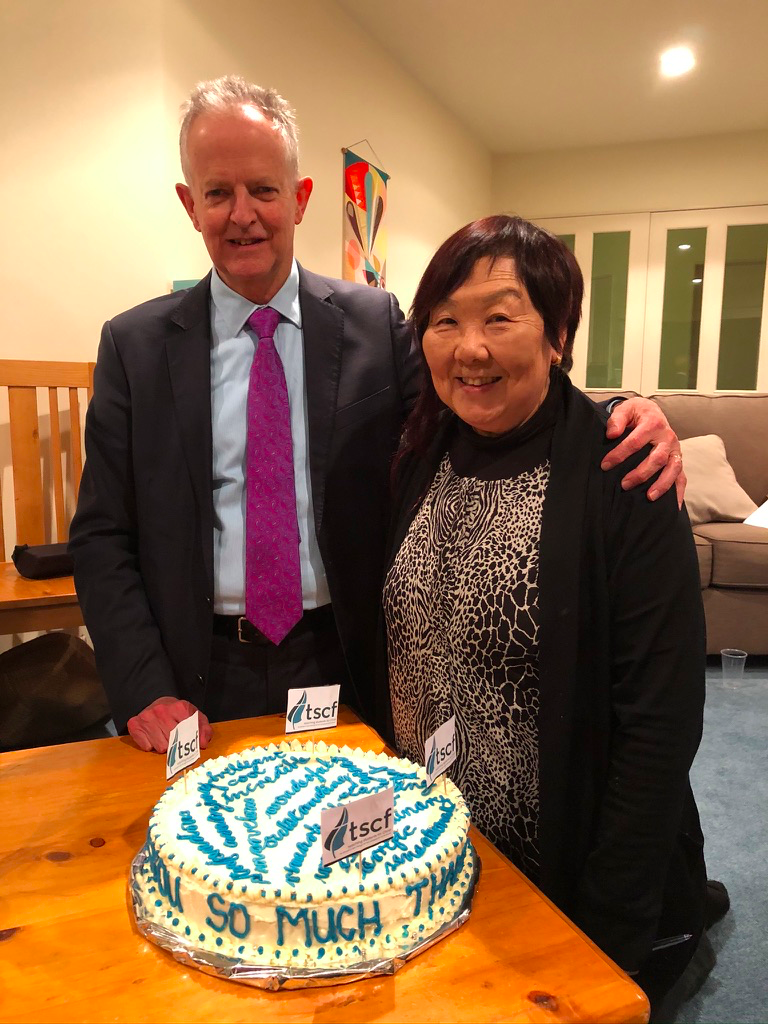 Rubee Yee grew up in Otaki, trained as a medical laboratory scientist (specialising in microbiology and immunology), and works for the Hutt Valley DHB. She has also completed training in biotechnology and biblical studies. She has a keen interest in child and youth ministries as well as cross-cultural mission.

Rubee has given years of passionate, committed service to student ministry with TSCF, especially international student ministry. Most notably, Rubee was instrumental in the merger of the Overseas Christian Fellowship with TSCF. Her involvement with international students has spanned the generations, meaning she is both well-loved and highly regarded by many TSCF students and graduates around the world.

Speaking of Rubee’s involvement with TSCF, former national director Nigel Pollock said he “couldn’t begin to count the many international students [Rubee has] welcomed, fed, driven around and befriended.” Speaking of her time as a board member, he added “Rubee doesn’t always say a huge amount, but what she does say is always worth listening to.”

Current National Director Ben Carswell added this tribute: “Rubee is recognised by many in TSCF as a legend. Over the last 40 years, she has shown a consistent commitment to and advocacy for international students. Whilst she has never been an ‘up-front person,’ Rubee has faithfully and humbly worked behind the scenes to ensure our commitment to reaching international students and investing in them has remained central to our identity as TSCF.”

Judge Andrew Becroft honoured Rubee as someone who “embodies what TSCF is all about in terms of living out her faith in a demonstrable way that attracts others to Christ,” and expressed his desire to live up to this. Nigel added, “It is a significant legacy that you have left in the life of many, and we will miss you.”

We know Rubee plans to remain very much involved with TSCF and international students, so it is absolutely fitting that she has become one of our vice presidents.

Andrew Becroft was born in Malaysia and educated at Rongotai College, Wellington. He graduated with a bachelors degree in Arts and Law, and helped to establish the Mangere Community Law Centre. He went on to serve as District Court Judge to Whanganui and Principal Youth Court Judge, before becoming Children’s Commissioner.

Since joining TSCF as a student at the University of Auckland and then becoming the EU president, Andrew has been wholeheartedly involved in and passionate about TSCF’s mission and ministry. In his 15 years as TSCF Board Chair, Andrew’s contribution has been immense and his commitment unwavering, despite an increasingly demanding work schedule.

Three generations of TSCF national directors have acknowledged and paid tribute to the significant role Andrew has played in supporting them and the wider work of TSCF. Andrew Saunders has described Andrew Becroft as “my chief fundraiser when I was [TSCF] General Secretary,” ensuring that his role was fully funded during the 10 years he led the movement.

Nigel Pollock described some of the significant contributions Andrew Becroft has made to TSCF, including: 1) helping to strengthen our bicultural identity through incorporating te reo Māori, powhiri, and developing relationships with Māori and Pasifika students; 2) his commitment to discipling and investing in future leaders, and 3) his conviction that the Bible should remain at the centre of who we are and all we do as TSCF.

National Director Ben Carswell holds Andrew in the highest regard: “If it wasn’t for a ‘chance’ conversation with Andrew in 2006 in Wellington, I wouldn’t be in NZ and serving in the role I am now. Andrew and I clicked from the moment we met, and he has been a loyal friend and supporter since then. His constant encouragement, wise words and timely challenges have been crucial in my spiritual growth and involvement in TSCF.”

“Andrew’s faith in Jesus has shaped his work and every part of who he is. I deeply respect him for that and regularly hear from many people who hold him in the highest regard. I know he has been inspirational to many students and graduates, as well as his own peers. Both for myself and on behalf of TSCF, I want to express our sincere thanks to Andrew, his wife, Pip, and their family for all they have brought to and sacrificed for the work of TSCF. We are delighted that Andrew has agreed to become TSCF President, and remain involved in and committed to our mission.”

Andrew expressed his own gratitude for his involvement: “Whatever I’ve given to TSCF over the years, TSCF has given me much more. I would not be in the role I’m currently in…without…the transformative influence of TSCF.”