A new era for TSCF leadership 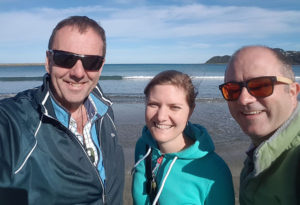 National Director Nigel Pollock has accepted the call to lead another IFES movement—InterVarsity Christian Fellowship in Canada. In May its board invited him to share the vision and energy that he has invested into the role here.

“It has been an absolute honour to spend the last 12 years in New Zealand,” Nigel said. He left at the end of August to begin work in Canada, but will return in October for scheduled commitments and some farewell events, details of which are on TSCF’s website.

“This is a great privilege that has been entrusted to us and is an enormous challenge as well as a huge opportunity,” Nigel said. While there are similarities between the history and operations of the two organisations, InterVarsity Canada has 200 staff, 9 camps, and high school ministries in addition to university work.

Nigel and his wife, Ailsa, see this as an opportunity to do more work together, both in hospitality and in travel. “We will miss NZ enormously but will definitely be back and hope to host some Kiwis in Canada,” Nigel said. His role here officially ends in the new year.

The board has appointed Ben Carswell, Head of Student Ministries, to be the next National Director. Ben was part of UCCF in the UK before he moved to Wellington 10 years ago with his wife, Jenni, to join the student ministry here.