Samuel Bridge was born to Luke and Phil Bridge (both former LUCF), 8 August, brother to Grace and Nathaniel.

Elias Jack Goodhue, a recent LUCF grad and midfielder for the Crusaders, played in the tour game against the British and Irish Lions on 10 June and scored a try in the Super Rugby Final as part of the Crusaders team that won Super Rugby 2017.

The Australasian Religious Press Association again recognised Canvas, and Robyn Drake, awarding a bronze in Best Faith Reflection for her column “Building to plan” in the summer 2016 issue. 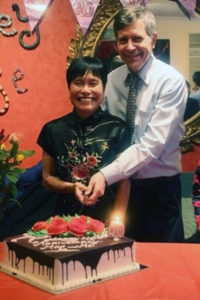 The sudden death of Otago Polytechnic Chaplain Mike Wright, 57, on 26 July has left that community in shock. Mike served the church in New Zealand in many capacities, participating in the Otago Regional Support committee alongside Otago team leader James Allaway.

“In his work, Mike brought together aspects of being a pastor, a mentor, a spiritual director, a teacher and an academic,” James said. “However the main reason he was an excellent chaplain was how he reflected the love and grace of God to everyone who came in contact with him, and it is this aspect of who he was and his work that I will miss the most.”

The Dunedin team continue to pray for his friends, wife Sheryl, three children and colleagues.